The term "microbes" refers to microscopic organisms of any type, such as bacteria and fungi. Many microbes play a central role in the decomposition of dead organic matter. They do this by secreting enzymes that break the bonds between long chains of molecules, called polymers, releasing smaller molecules that can then be absorbed. Different kinds of enzymes are needed to break down different kinds of organic compounds, which all have different energy content. Microbes selectively produce enzymes to acquire the energy they need, preferentially targeting high-energy compounds whenever possible. This leads to a complex pattern of enzyme production, resulting in changes in the chemistry of dead organic matter during decomposition as high-energy compounds are consumed. Regardless of the compounds being decomposed, microorganisms release carbon dioxide as they consume the molecules they obtain during decay. 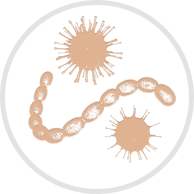